Captain Ronald Johnson of the Missouri Highway Patrol (retired) discusses the hostile racial tension that followed the Aug. 14, 2014 fatal shooting of Michael Brown, and his efforts to restore peace between the African American community and law enforcement. His remarkable story inspires listeners to consider how they can promote peaceful race relations in their own communities. (Part 1 of 2)

Cultural appropriation: a look at the popular concept

Of blind spots on the left and right

Identity politics: cherry-picking our sense of self 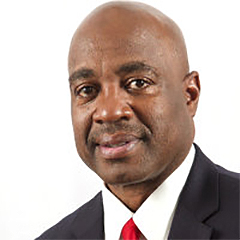 Captain Ronald Johnson of the Missouri Highway Patrol (retired) is the founder, owner and COO of Lodestone Solutions Group, a leadership training and consulting company. During his tenure as a Highway Patrol Captain, he gained national prominence when he was charged with the enormous task of restoring peace between a hostile African American community and the local police following the Aug. 14, 2014 fatal shooting of Michael Brown which sparked race riots throughout the city. Capt. Johnson was praised for his effective leadership, empathy, compassion, and selflessness. He has authored a book about these experiences titled 13 Days in Ferguson. He and his wife, Lori, have two grown children.