Experiencing the Best Marriage for You and Your Spouse

Ted Lowe and his wife, Nancie, believe many couples make their marriage harder and more complicated than it needs to be, and suggest cultivating four simple, core habits for a healthy relationship in a discussion based on his book Your Best Us: Marriage is Easier Than You Think.

Extra clip: How to help your grieving spouse

Four steps to giving and receiving comfort in marriage

5 simple ideas to have more fun in your marriage 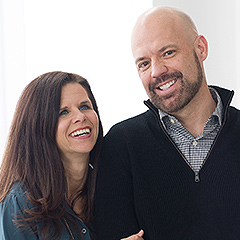 Ted Lowe is the founder and director of MarriedPeople.org which is dedicated to strengthening marriages by offering encouragement and practical help through podcasts, blog articles and other resources. He and his wife, Nancie, have been working with couples in different capacities since 1998. They served on youth and drama staffs at Saddleback Community Church in Lake Forest, Calif., and later traveled across the nation playing various roles at youth and marriage events. Ted then served on staff at North Point Church as the Director of MarriedLife from 2002-2010, where Nancie helped program and host events.Ted recently released a new book for married couples titled Your Best Us. He and Nancie have three teen children and reside in Atlanta.

View all broadcasts with Ted and Nancie Lowe.