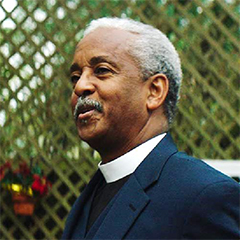 The Rev. Anthony Thompson is the pastor of Holy Trinity Reformed Episcopal Church in Charleston, South Carolina. His wife, Myra, was murdered while leading a Bible study at Emanuel African Methodist Episcopal Church as a white supremacist burst in, killing her and eight more victims. The Rev. Thompson has authored a book about the incident and the need to forgive the perpetrator titled Called to Forgive: The Charleston Church Shooting, a Victim's Husband, and the Path to Healing and Peace. The Thompsons have three children and six grandchildren.

Broadcasts with The Rev. Anthony Thompson