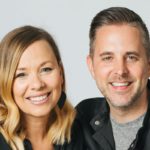 Broadcasts with Matt and Sarah Hammitt