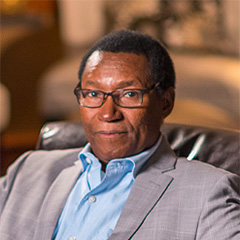 Dr. Charles Mully (sometimes spelled Mulli) is the founder and director of Mully Children's Family, a ministry that rescues and rehabilitates abandoned orphan children in Kenya and surrounding countries. His is a powerful rags-to-riches story. Born into poverty and abandoned by his parents at age 6, Charles grew up begging and stealing in order to survive. He later enjoyed great business success, starting as a casual laborer and quickly advancing through promotions and a series of jobs until he had enough money to start his own business. He eventually became a millionaire and international traveler. Charles' family lived a privileged life, but all of that changed when he felt called by God to sell everything in order to care for helpless orphan children living on the streets of Kenya. A movie about his remarkable life and ministry is being released in October, 2017. Learn more about the film Mully at mullymovie.com.