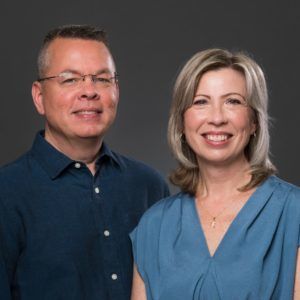 Andrew Brunson and his wife, Norine, served as missionaries in Turkey for 23 years. During that time, he was pastor at Izmir Diriliş (Resurrection) Church, a small evangelical Presbyterian congregation in the city of Izmir. While applying for Turkish permanent residency in 2016, Andrew was falsely accused of terrorism, and both he and Norine were arrested. While she was released about two weeks later, he remained imprisoned for two years. After his release, the couple immediately returned to the United States. Andrew has since authored a book titled God’s Hostage: A True Story of Persecution, Imprisonment, and Perseverance. Andrew and Norine have three children. Learn more about Pastor Brunson at his Facebook.

Broadcasts with Andrew and Norine Brunson