Offering hope to those struggling with depression, Plugged In's Paul Asay discusses his own battle with this affliction and the healing he's experienced through his relationship with Jesus Christ.

How to care for your mental health during coronavirus

Unpacking the stigma of depression

Symptoms of depression in teens 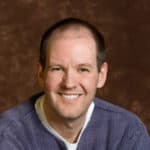 Paul Asay has been part of the Plugged In staff since 2007, watching and reviewing countless movies and television shows. He’s also written for other publications including Time, The Washington Post and Christianity Today, and he has authored several books including God on the Streets of Gotham, which was borne out of his love for superheroes and finding spirituality in unexpected places. Paul and his wife, Wendy, have two grown children. You can learn more about him by following him on Twitter,  @AsayPaul.

View all broadcasts with Paul Asay.