Valuing Marriage in a Culture that Doesn't

Lamar Tyler and his wife, Ronnie, co-founders of the global ministry Black and Married With Kids, discuss the importance of promoting a positive, Biblical view of marriage and family, both in the African-American community and the culture at large.

What kind of example are you setting in your marriage?

Extra clip: The recipe for a good dad 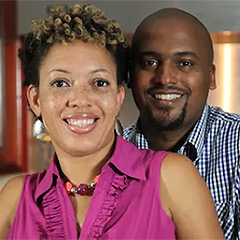 Lamar Tyler and his wife, Ronnie, are the founders of BlackandMarriedWithKids.com, the largest independent African-American marriage and parenting website on the Internet. The site has attracted more than 6 million readers and has been featured in major media outlets including The Washington Post, Ebony Magazine, and Essence Magazine. What started as a small, personal blog has become an international brand under the Tyler New Media umbrella that boasts four independently-produced films and a social media presence that includes over 500,000 Facebook fans. Along with writing for and managing the Black and Married With Kids website, running Tyler New Media, and producing and directing films, Ronnie and Lamar travel across the country screening Tyler New Media's films and speaking on marriage and parenting-related topics. Lamar and Ronnie reside in Atlanta and have four children.

View all broadcasts with Lamar and Ronnie Tyler.