My Journey to Salvation (Part I of II)

Adolph Coors explains how growing up in the Coors Brewing family taught him that wealth could never protect him from misfortune. After his father was murdered, Adolph spent years searching for meaning in life, which he eventually found in a relationship with Jesus Christ. (Part 1 of 2)

If someone you love is an alcoholic

When doubt becomes a catalyst for faith 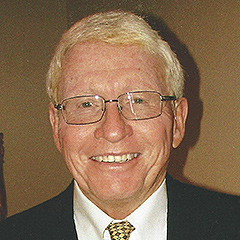 As an heir to one of the world's largest and most famous breweries, Adolph Coors IV thought that he could succeed on his own. With his prestigious name and proud family heritage, his future was bright. That was until a series of trials and tragedies left him insecure and unfulfilled. While Adolph searched for peace, security, and success in every place the world recommends, he would eventually find it only when he surrendered control to Jesus Christ. A compelling and popular speaker, Adolph has shared his powerful story to a variety of audiences including churches, universities, corporate America, Capitol Hill, the Pentagon, radio, television, and various prayer breakfasts across North America. He resides in Colorado with his wife of over 51 years, BJ. They have two sons, two daughters-in-law, and eight grandchildren.