Following God’s Pace Instead of Your Own

Terry Looper, a corporate CEO in the energy industry, tells how he was once a highly-driven entrepreneur who valued success and money over his family and health. He describes what it took for him to change his priorities and give his life to God, and he shares his four-step strategy for seeking God’s will before making any decision.

8 steps for making time in your marriage

The meaning of work in God's grand narrative

Extra clip: The power of tithing 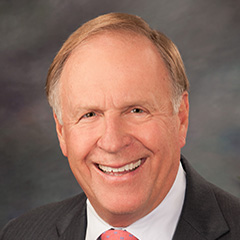 Terry Looper is CEO and Founder of Texon LP, a Houston-based energy company that views its core values and employees as the keys to its mission of being the best service provider in its industry. Terry’s passion is to serve as a mentor to fellow business and nonprofit leaders. He has authored a book titled Sacred Pace which describes his faith journey and offers a biblical framework for making large and small decisions in all phases of life. Terry and his wife, Doris, have been married for 50 years. The couple has two married daughters and five grandchildren.

View all broadcasts with Terry Looper.