Finding Peace of Mind in Christ

Duck Dynasty star and author Phil Robertson discusses his colorful past as a (self-described) "scumbag" and "beer joint" owner who sought out worldly pleasures at the expense of his young family, and describes how his relationship with Jesus Christ has transformed his life.

Listen: "Reasons to Believe in Jesus"

Jesus' seven words from the cross

An invitation to join God's family 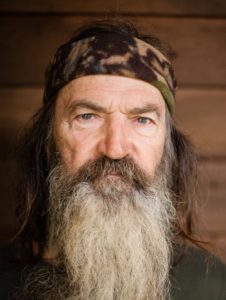 Phil Robertson, an avid hunter and outdoorsman, is the founder of the highly successful Duck Commander and Buck Commander brands of hunting merchandise, and the patriarch of the Robertson family, featured through 11 seasons on A&E’s television program Duck Dynasty. A former Louisiana Tech football star and later, highly-acclaimed school teacher, Phil currently hosts the Unashamed podcast and is the star of In the Woods with Phil on Blaze TV. He and his wife, Kay, have been married for 55 years, and have four grown sons, more than 15 grandchildren, and several great-grandchildren. Learn more about the Robertson family by visiting the Duck Commander website.

View all broadcasts with Phil Robertson.