Founders of the popular comedic group The Skit Guys, Eddie and Tommy’s 30-year friendship didn’t start out as one might expect. Eddie and Tommy met in high school when Tommy stole Eddie’s girlfriend, and the Lord worked from there to spark in both of the men a love for friendship and Jesus! They describe the importance of friendships among men, transparency and vulnerability in relationships, working through conflict, and when marriages come into the mix. They are a fun group that you won’t want to miss!

Are you the man God wants you to be?

Double dating to strengthen your marriage 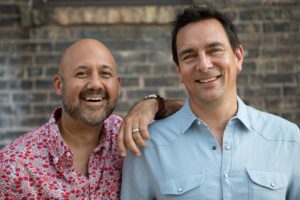 For over thirty years, Eddie James has performed comedy skits and improv on thousands of stages all over the world, acted in hundreds of short films and skits viewed by countless. On top of being one-half of THE SKIT GUYS, Eddie has co-authored Videos That Teach books with Doug Fields, and he’s also co-authored over a dozen publications with Tommy Woodard, including Skits That Teach v.1 and 2, Instant Skits, TV Shows That Teach, and Skit Training 101. Eddie lives with his wife and two daughters in Sachse, Texas, and is a creative consultant and online pastor at his church. Tommy Woodard is one half of THE SKIT GUYS, Tommy has co-authored over a dozen publications with Eddie James. He also serves as a pastor at Newchurch in Oklahoma City. Tommy lives in Edmond, Oklahoma with his wife and kids.

View all broadcasts with Tommy Woodard and Eddie James.